Curious about the detailed answer, watch the following video. It is a Dutch spoken video, but a translated script can be found at the bottom of this page.

In this video our consultant Niek Arts answers these and the questions below:

How do you view the developments that are going on regarding ERP suppliers that add MES functionalities and vice versa?

How do you see the integration from level 2 towards level 3?

To what extent do ERP and MES communicate with each other?

On this page you can read much more about MES . Among other things:

If you have any questions about this video, please don’t hesitate to contact us. We are happy to help you!

Curious about what a new MES can mean for your organization?
Please contact Jos.

Sheets (2) belonging to this video 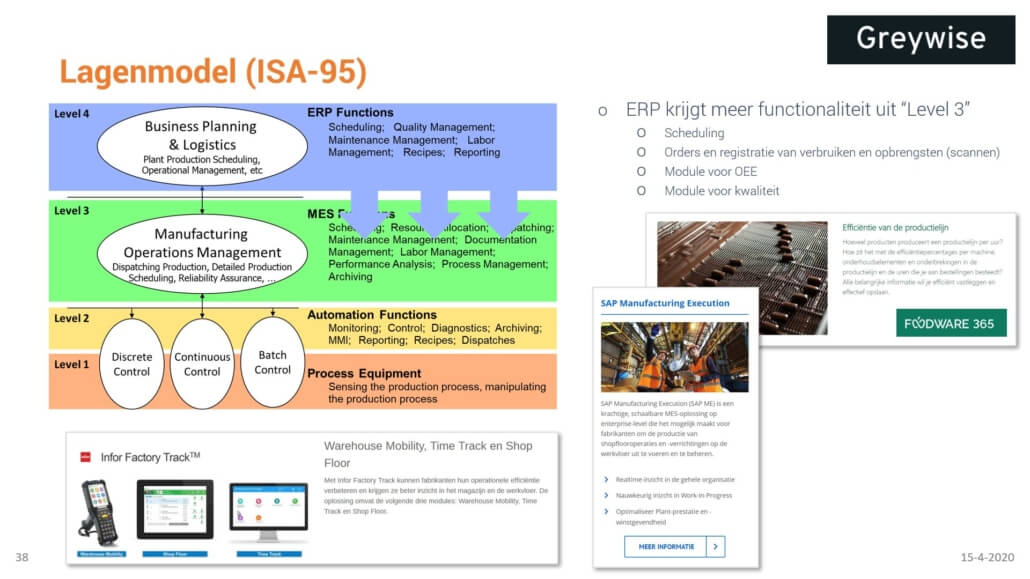 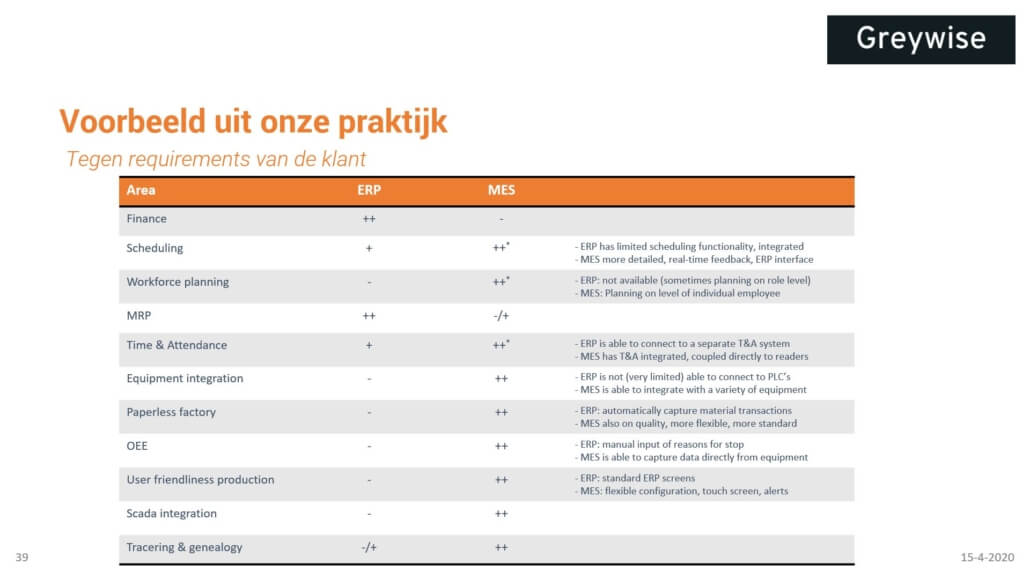 In our previous acquaintance, we were regularly asked: what is the difference between ERP and MES?

From that, we understood that that was actually not quite as clear as it might seem to us, so I would like to zoom in on that.
The traditional layers model. So what I just said, I’m not going to get into it very theoretically. I actually do here, but that’s the next chapter.
Well you see, ERP really positions itself at level 4, so it’s business planning.
MES is really on the manufacturing operations planning. In terms of content, an ERP system is essentially different from an MES system.
It (ERP) is actually concerned with the planning and especially administration of the entire factory or several factories and is actually company-wide.
If you have multiple factories, you often have the same ERP system and an ERP system is transactionally bound.

Where MES actually receives the data directly from the factory and can immediately process it is ERP; that goes with transactions, it goes with um.. –
It’s a lot slower. It is actually suitable for a different purpose than what MES is suitable for. And with that background it was also developed and made. You keep track of your supplies. It contains a very complete financial administration. All those things that is typical of an ERP function.

MES is much more on the production floor

What should he do, at what time, with what prescription. Is he getting a signal from the controls?
Then there are very fast signals, very fast response time.
ERP is simply not suitable for that.
What you have seen in recent times is that ERP is trying to gain ground there at the expense of level 3 / MES.
What you see is that, for example, scheduling is really coming to ERP.
So also detail scheduling. So suppose you have a production line with all kinds of workstations on that production line, more and more is coming from the ERP.
Also that you can plan those worker stations separately instead of: line – make this order. Orders and registration of consumption and revenue.
Well, you can scan in an ERP. There are modules in ERP on which you can really scan stock to a line and indicate it as consumption
Module for OEE. We see that every now and then there are some systems that are real.

Here I have mentioned a few examples. Really trying to integrate those modules for OEE and also for quality.
So, for example, you do your quality control in our SAP-MES module. And then it is also registered. Well, these are just three examples that I mentioned.

It’s just what’s right for your situation. I must confess that I have not really had much to do with these MES systems. But maybe that has something to do with me too.

Which functionality are we going to do in MES, which in ERP?

Just an example from our practice. A while ago we did a scan at one of our customers of okay which functionality are we going to do in MES, which in ERP? That is where these differences actually came from.
So you really see what I just said: finance is very clearly in ERP.
That MES has nothing to do with finance. The MES consumes business, generates business, but the entire financial settlement is all done in ERP.
Scheduling: ERP can do it. MES can do it in much more detail; really on workstation, on work area.
With regard to workforce planning: in ERP it is almost not possible. In MES you can really schedule people on a certain
line or at a particular workstation to deal with that competency.
MRP: yes, really a typical ERP functionality because ERP looks much further.
It is expanded much further in time. As mentioned, MES really focuses on the coming hours, days and not much further than that.

Here, for example, where MES is really better suited. For production in this case of course and ERP that is much more on a different level than MES
I would like to clarify the latter a bit more. This was also one of the conclusions from that report: what ERP can do very well
is to say: this end product is made with these raw materials, but what has happened in between is often not known at all and
there we come up with the lists and the ‘Excels’ and things like that and basically what you want to know: what happened, in which process and which tank, for example, a semi-finished product was used, what were the process settings at that time that product was made? Which version of the recipe was used? was it version 2, version 3, was that ‘updated’ yes or no? What were the results of the quality measurement?
Why did we hear an anomaly from the market?
What was measured by that operator?.. Those are exactly the points that ERP cannot provide. And this is just a zoom in on that table we just had. One of those differences between MES and ERP is really the level of detail.
You get that from production, you can’t do that in ERP.
On the other hand, you don’t get to do the financial processing part in MES, so they are actually two different areas of work.
If there are no questions, I hand over the floor to Jos.

From no question to…

Question: it’s about the development of that MES going to ERP. How do you assess that yourself? You mean this one?
I think it is a very logical development because you see that those ERP men also see that there is still something to be done there.
Hey look, my first picture; there you saw the piles of paper and Excel.
Often these companies are also trying to find something to fill a gap.
In some cases, this can also be done with ERP and not to criticize certain parties, but there are ERP people who very easily say that we can do that too. And then it can be done in a certain way, but you can’t deviate from that standard if you want other things either. And you can’t say, for example, well, for the future we also want line integration. No, then stop. But you can scan the barcode, so yes, we’ll see that vertical integration comes. You can only see that the MES suppliers have really focused on a certain work area, but they are far better at that than ERP.

How do you see the integration from level 2 towards level 3?

Good question. I deliberately didn’t focus on that, because then I think you can take another hour. But that’s one of the best integrations I always think. From really removing that stool from the operator or relieving an operator… That other sentence is a bit strange. No, but you see that more and more functions are being added: OPC, UA… That is being used more and more. You really see, especially with the download to a batch system, you really see that: MES has a certain version of the recipe, which is done with a batch system and it is completely executed by the control. I mean we are involved in projects where the operator actually starts a production order in MES and really only needs to do quality measurements afterwards so that MES knows what still needs to be done. So they have to be organized extra, do they need to be heated or cooled or is it ready to be transported to the next tank. So that level 2 and 3 integration. What we also see in the developments between MES and level 2 and level 1 is somewhat less, but you can do that now and then, you also already have integration between certain sensors. And there you really see big steps being made. Really with entire interface layers, with which you actually have to build the entire interface, and not always separately with all signals to certain text in the PLC, but really that the interface layer takes care of everything and that it actually goes very fast. Of course level 2 is also developing better and better, so you can often already get XML messages from either a batch system or a SCADA system so that you immediately know a certain consumption. Question: you are talking about the integration of that ERP moving more and more towards MES. To what extent are the two going to communicate with each other? What I often notice is that you have your ERP next to your MES. For example, if you actually go to scanning, you actually want that automatic feedback: this is produced and then you feedback your material planning. Well look, that’s a matter of setting up interfaces… Yes, you can actually do that if you have SLP or… That just communicates with each other? Yes, because you need those orders from ERP to execute them in MES. For example, in MES you also have, for example, for your MRP run and your financial administration, you want to know what I have used
you can see that and you also want to let us know: ok, I have just produced this semi-finished product, so it is in the pipeline. Those are all signals that you can, well, you can do that from… you have the table that is interfaced with, you have XML, which is used very widely and in recent times SAP also has more and more, just as an example SAP to call, web interfacing… So that it actually goes through a direct signal. No, that’s… Look… You could of course use MES without the entire ERP integration, but then you miss a very large part. It’s really that integration. Okay, well, in most MES projects I always try to make it clear that it is not just one system that you come up with here as an island, but it is actually… You adjust the entire chain, from top to bottom. It is complete integration, so things have to happen here too, things have to happen here too. It’s not about: just tell your project what has to happen… No, we all do it together, because everywhere we adjust things and try to optimize, because that is the main question.